Zoos are very popular now. But what will happen to them in the future? Time will tell.

The last time I went to see an attraction with one of my sisters, it was to the Phoenix Aquarium. We both learned a lot and it was a thrilling experience to see jellyfish up close, despite the crowds milling all around us.

But, what will become of zoos now that COVID-19 has taught the world a whole new level of hygiene? Will modern zoos as we now know them eventually just disappear?

For sure, with the current changes in the way we view hygiene, zoos will have to figure out social distancing measures, just like all the other kinds of attractions that tend to bring people in close proximity to each other. And that may not be very easy.

But, maybe the coronavirus is not the only reason to question the future of zoos.

Many animal rights’ activists claim that they are little more than prisons, noting the fact that big cats are often seen pacing their enclosures as though they feel trapped. Research has shown that people who visit zoos and see animals pacing are more likely to say that they found their zoo experience to be negative. Interestingly, if the same animal is seen to be simply sleeping, visitors will find their experience more positive. 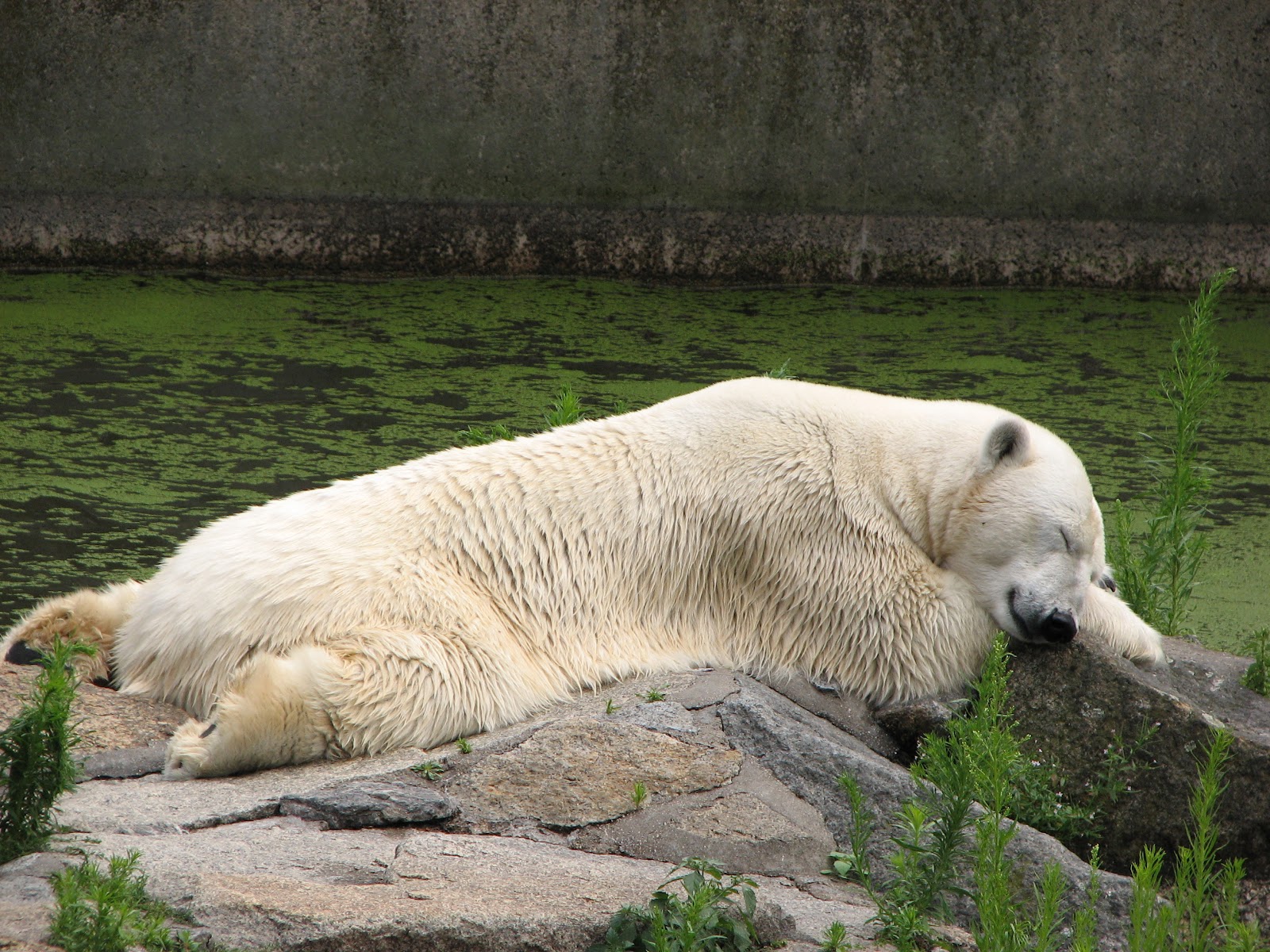 A polar bear napping at the Berlin Zoo.

According to the Association of Zoos and Aquariums (AZA), around 700 million people visit zoos every year, world wide. In the United States alone, they brought in around $22.5 billion in 2018.

Zoos are so popular that they attract more attendees than most of the popular games such as football, basketball, hockey and baseball.

However,Tiger Kings recently brought back the whole question of whether we should still have zoos or not.

It shed light on malpractices and animal abuse in zoos in a way that made many people wonder what will become of the tigers featured in the show. DID YOU WATCH TIGER KINGS? HERE ARE SOME FACTS ABOUT TIGERS THAT THE SHOW LEFT OUT. Hopefully, a solution can be found. But, that is not likely to be any time soon. It’s not like these captive-bred tigers can be returned to the wild. They would not be able to properly fend for themselves after being bred to live with humans for so many generations

Many viewers that have seen Tiger Kings find it ironic that the Tiger King himself, Joe Exotic, is now behind bars in a similar way to how he kept so many tigers behind bars.

But, there is a major difference. The big cats he kept behind bars didn’t commit any criminal offenses; they were simply born the wrong species and he used that to exploit them as they could not defend themselves. If they were capable of wreaking vengeance, who knows what they could have done? Meanwhile, Joe is locked up for attempting to murder who he considers to be his archenemy, Carol Baskin, the woman who runs Big Cat Rescue.

Back to the main point, however.

Zoos are not just for entertainment, although visiting for a good time has always been part of their legacy.

They are also important centers of education; a place where schools bring students to learn about wild animals outside of the classroom. Research has shown that the type of hands-on learning that is offered at many zoos helps students to retain more of what they’ve learned than if they attend a traditional lecture.

Zoos are also a place where families go to have a good time laughing at the antics of the great apes and admiring the polar bears. It is almost impossible to go to a zoo and remain straight faced the entire time, since there is so much to see and do to make the average person smile. And this is not done on purpose. It is in the interest of zoos to keep their visitors in a positive mood; this heightens their awareness of the animals and also makes them feel closer to conservation efforts to save endangered species. A paper published in Frontiers in Psychology says that visitors have a better chance of getting involved in conservation than people who have not visited.

Going forward, the new “normal” of our current era will surely make these kinds of mass attractions a thing of the past. Maybe they will still exist, but in a different way. But, for sure, zoos will not be completely done away with.

Look at how the traveling circuses changed with the times. They rarely feature exotic animals anymore, focusing instead on rides and fun foods.

Traveling circuses that do use animals for entertainment are now seen as just wrong and frankly, there are hardly any left, if at all. The animals are used as showpieces, just to make money. Their existence is not to help the animals in any way, and the viewers don’t get to learn much.

What can you learn from watching an elephant balance a ball on its trunk? Not much, except that you end up wondering how the trainer got the elephant to do that and if the elephant tried to fight against it.

Traveling circuses aside, the real reason that the idea of zoos came about wasn’t just to display animals. Back in the 1800s, zoos made spectators feel like they were visiting faraway places in an era when travel was limited. Displays featuring depictions of countries also included humans that were not considered to be part of the civilized world. Thankfully this practice stopped by the 1950s after many protests were made by those who were hired to be the objects of observation.

Ota Benga, a Congolese Pygmy of the Mbuti tribe, in a display at the Bronx Zoo in 1906

When Carl Hagenbeck, the original inventor of what we know as the zoo today found himself making lots of money with exotic animals in displays for the paying public, others decided to follow suit. And then, major exploitation followed.

Zoos popped up everywhere. They gave people the opportunity of a lifetime; to see animals in their own “habitat”, almost recreated to resemble the real thing.

Then, the petting zoo became popular because they sold the idea of the rarity and exclusivity to touch, pet, and take pictures with juvenile or tamed wild animals.

There is a darker side to petting zoos, recently uncovered after an investigation was made about the tigers being kept at the Tiger Temple in Thailand.

A tiger walks with a monk at the Tiger Temple

These supposedly well-trained tigers, seen to be orderly and quiet and well behaved, were a hit when the documentary The Tiger and the Monk came out in 2011 as part of a series called Secrets of Nature.

The world was impressed with how easily the monks handled their proteges. The tigers walked beside the monks calmly on leashes, drank their milk, and did not misbehave. Visitors could take pictures with tigers’ soft, sweet heads on their laps or selfies with tiger cubs for 17$. Amazingly, the tigers were incredibly well disciplined and the temple seemed so concerned with the welfare of their tigers, even sharing conservation plans to increase the numbers of tigers in the wild.

Or so everyone thought.

A police raid was performed on the temple in 2016. They discovered that the tigers were being illegally bred and that body parts like teeth and skin were being sold for high prices. 40 dead tiger cubs were found in a freezer. Tourists had also noted that the tigers always appeared drugged when they were used for photo ops.

Not a good life for any animal. The zoo was closed due to animal trafficking, among other violations against animals.

And so, the question of the importance of zoos in our present world is something that we have been asking for a few years now, knowing what we know about animal abuse and exploitation. Perhaps the next generation will only know what lions look like from seeing movies or shows about their habits in the wild if we do away with zoos as we know them in the next few decades to come.

But, there is no denying that they are important for conservation work.

Several species have been saved from the brink of extinction by the conservation efforts of zoos that have put in the effort. The Phoenix Zoo has saved the Arabian Oryx and the National Zoo in Washington D.C. has helped to increase the diminishing numbers of Golden Lion Tamarins. So, for sure, conservation is a good reason for them to exist.

The Black-footed ferret was saved from extinction by zoo conservation efforts.

Does the act of conservation increase their significance? In one sense, yes, in another sense, no.

Yes, because conservation efforts are needed for species that need our help. It’s hard enough to protect some of them from poachers and trigger happy hunters. Also, in order to teach the public about how important it is to preserve these animals, seeing them alive is supposed to have a greater impact as opposed to seeing them on screen. And, seeing as the public is willing to pay, this money can help to fund the zoos.

The other side of the coin is that wild animals should not be on display for our entertainment. They deserve to live happily in their environment with minimal disruption from us. We have done enough damage to the homes of the living creatures on our planet.

Gnus graze peacefully over hundreds of acres of wilderness in Tanzania.

So, maybe the answer is that we need to balance out conservation efforts without compromising the well being of those animals that need help, whether we are in a pandemic or not.

Hopefully, this is what will happen in the not so distant future. However it will happen, it will take quite a bit of time and money to sort it all out.

“What are you... Chicken?”  Why is this expression so totally wrong

More in Pets and Animals